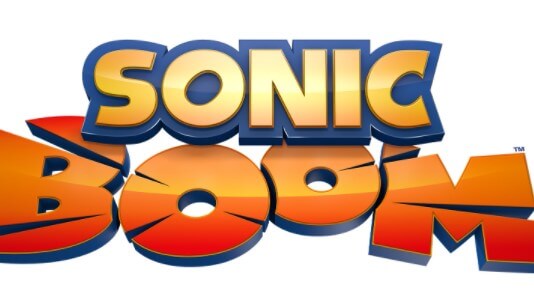 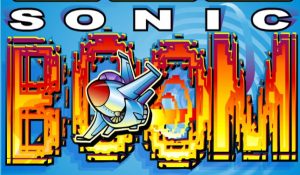 In the world of virtual online casino gaming, the absolutely most popular games are the slots, or ‘pokies’. Pokies come in a vast variety of themes and variances in game play. Rest assured, there is a pokie out there for all levels and tastes. For example, some pokies have themes relating to places, such as Africa, while others have themes that are built up around movies or TV shows. Some pokies are ultra modern, while others are built to be traditional and simple. Today we are going to take a look at Sonic Boom pokies, released by Microgaming Software in 2005.

Microgaming Software, the author of Sonic Boom, is no stranger to the creation of well designed casino games, having been part of one of the first online casinos created, in 1994. Sonic Boom pokies is a simple, traditional, classically designed slot game, with just 3 reels and 1 playline. Jets are fast and quick, and so is this gameplay. All of which makes Sonic Boom Pokies your basic themed, no frills, classic slot machine game. The theme of Sonic Boom Pokies, is that of fighter jets in action, with the logo of the game featuring the caricature of an F-16 fighter jet smashing through the sound barrier, leaving a sonic boom in its wake. The Sonic Boom interface is a simple one, done in pixel format, with very simple audio sound effects. The two-tiered paytable shows the available prizes and combinations, is on the right side. The left side contains the 3 reels. The symbols used in Sonic Boom are the Jet plane (Sonic Boom logo), BARs, and cherry, which are used to create the nine winning combinations. 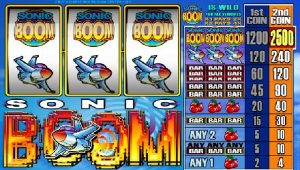 The wild symbol, is of course, the Sonic boom, and can be used to substitute for any of the other symbols to create a winning combination. Mode of play is simple for this game, as players can choose to bet either one or two coins per spin, with coin denominations from .05 to 5.00, with a maximum wager of 15.00. Having only one payline means that all winning combinations will occur in the middle row. Players who choose a 2 coin game can win up to 2500 coins, and those who choose a 1 coin game can win 1200 coins. As for multipliers, one Sonic Boom symbol will double the payout, and two will quadruple the payout of any winning combinations they are part of. The Sonic Boom pokie has no progressive jackpotÂ but does have a free practice mode of play.

Sonic Boom pokies is a straightforward, simple game, that is the perfect pokie for those who have never tried online slots before. This game is also well suited for the seasoned slot player who wants to relax with a fast and quick game of slots. Not only is it a simple game to understand, but also budget wise, as it can be enjoyed with those who have a small bankroll as well. Sonic Boom is classified as a Flash game that can be played in the browser window, without downloading additional software. All in all, if you are looking for a quick game of slots after a hard days work, you just can’t go wrong with Sonic Boom Pokies.